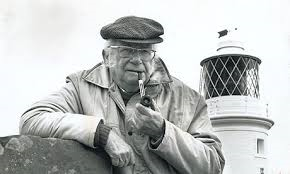 “Thank you SO much Alfred Wainwright…”

Was what I was thinking, as I faced the route before me. All those books he wrote religiously full of every rock and crevice of the Lake District. His passion, writing about all those walking routes, describing each one. The views, the climbs. The terrain that he lived and breathed.

I must admit as a teen I had spent a couple of years with friends, traipsing around the Lakes. Spending a week at a time walking from one Youth Hostel to the next one. Then in the evening going to the pub and making a valiant attempt with my friends of drinking it empty. Because it was a cheap holiday see?

The only reason I went was my friends couldn’t afford a holiday abroad being still at collage. And while I was working and earning, going alone didn’t appeal.. It was a distant prospect. The sun. On the beach. Warm.

Its a resounding memory of walking up hills, carrying everything with us to each destination. Trying to dry it out when we got there. Then going to the pub. Blisters. Lots of blisters. And finally, swimming in the lakes, getting covered in leeches and running round screaming when we realized. The scene was one of a group of frantically shivering lads using a dry stone wall like a sand paper rub in an effort to get the buggers off..Caddy was the worst. I seem to remember him screaming more than most..

So the abiding memory was one of long walks and reading what Wainwright had to say about the next route..

I just wished he drove once in a while and wrote about this one..

Seriously, you can’t beat the smell of burning rubber drifting through your nostrils to make you focus. Especially when its your brakes working overtime that are actually creating the smell.

There was a slight drift of smoke that kept appearing intermittently from below my bonnet accompanied by a finger breaking grip on the steering wheel. My eyes were fixed on the descent before me but there was nothing for it. I couldn’t go back – there wasn’t anywhere to turn around. And this was all downhill. And when I say downhill. I mean there wasn’t any leveling out till you negotiated this winding drop that disappeared from view some 400 foot below. And even then you were non the wiser whether or not it did even out, because the road was swallowed into a black hole that disappeared into a forested area below.

You daren’t take your eyes off what lay before you as you headed towards it.

And all the while the only thing I could think of were the tools, packed into the back of the van, the weighty presence behind me, and, what would remain of any of it and more importantly, ME if these brakes did fail…..

You don’t realize how tense you are until you reach the end of the ordeal. When you manage to break your death grip on the steering wheel and pour from your car on rubber legs and lie face down prone on the tarmac. Hugging the first inkling of level earth you reach. Its at this point you realize you could crack walnuts with your sphincter.

Pope John Paul ii must have been terrible with heights, because he did it every time he got off a plane. He was no sooner off than he was face down on the deck. At least I never kissed it. Well, maybe a little bit..

And walnuts? He must have been a world champion..

This situation was due to a hasty conversation at the breakfast table that morning with Graham, whose B&B I was staying at during the week. (See Ginger Delight)I had relayed to him the fact that the property I was currently working on was on the out-skirts of Egremont, surrounded by rolling pastures filled, mine field like, with lambs, with the sea just beyond the final hill at the back of the house.

It would mean a 50 minute drive back to, and through Keswick onto the M6, to turn South and head home. I was gambling on whether it would be quicker following the A595 coast road past Sellafield down, toward Barrow-in-Furness then swing away from the coast heading inland, entering the M6 some 30-odd miles south of where I would have originally joined it.

“You don’t want to drive all the way through Keswick! You’re right on the A595 where you are! Its a straight drive along the coast. If your lucky, the time you’ll leave you’ll miss the traffic at Sellafield and have a clear run to the motorway.”

Graham also worked as a tour guide around the lakes and knew what he was talking about.

“Oh aye. There’s a little road I know – just past the Brown Cow Inn – that’ll cut a big corner out of the journey. Straight over the top. Great view! Save you 30 minutes..”

I sat thinking it through, eating my poached eggs and the sublime locally sourced bacon (my god it had a taste and smell that brought back child-hood memories. When your mum bought real bacon from the butchers..)

And the more he talked the better the idea sounded.

And he was right. The view was fantastic. There was a remoteness to the route. I found myself in the middle of no-where. Surrounded by a view that was absent of human occupation, which in this day and age, in this country, is a difficult thing to come by. There were odd vehicles travelling behind at distant points, and cars heading at intervals past me. But it was hills and with dry stone walls giving way to an expansive view of Cumbria to the North. Seriously breathtaking.

I had managed a quick journey down from Egremont, to find the turning by the Brown Cow Inn. I drove up into the hills thinking of the time I was saving.

What I was faced with, as I turned off the A595 and labored up the hill, was a ribbon of a road. Barely wide enough for 2 vehicles to pass each other. Initially, it was narrow, yeah, fine. It had passing points. It was even reasonably level – if patched – and I felt quite confident driving along my merry way thinking,

And the view was immense. The route giving panoramic scenes of the valleys through the Lakes, where the sky seemed to go on forever and clouds scudded along above, casting fleeing shadows on the earth below. Flowing up and down hills as you took in the scene arrayed before you. It seriously was breathtaking and I’d challenge anyone not to be moved in some way by it.

I certainly was not long after, as the surface began to change. And what had been a reasonably flat -if narrow -road, was now forced to follow the contours of the land. It now began to wind up and down, in very short troughs and peaks. And bend in and out as it was forced to hug the hillside and overcome the variety of streams that swept off the hill and under the rough bridges built to contend with it. The result was that your view of oncoming traffic was severely limited. I couldn’t see what was before me, or which way the road twisted, until I rose to a crest or crept out of a bend.

What I began to worry about – so short and deep were the rise-and-falls of the road – was had the invisible person heading towards me seen me? Was something in front of me heading in my direction, but unseen, because he was falling into the troughs as I appeared on the crests and we were unknowingly heading towards each other blindly…

Each time I climbed out of a shallow dip in the road, it was to desperately grab a glimpse of the tarmac before me to see if anything was approaching in the opposite direction. If there was I was blindly hoping that he had seen me and was applying the brakes ready to edge round each other, half on and half off the road depending on the accommodating nature of the opposite driver. If either one of us were lucky, there would be a passing point to use. If not…

If your interested in driving it this road, and are heading south on the A595, turn left just after the Brown Cow Inn in Millom. The road will look like something you would squeeze a wide pony up, but it is navigable.

I guarantee the views will be spectacular on a sunny or cloudy day..

I highly recommend you stop to take them in when you reach the tops. If you can find anywhere wide enough to pull over. And, if you can prise your fingers from the steering wheel when you finally come to a halt. A brown paper bag to pant into, or a asthma inhaler might be necessary to help you calm down at this point.

Also leave the bastard in gear when you turn the car off. Gods knows where it’d end up if it starts rolling.

I’ll admit, I wouldn’t send my mother-in-law up there if the weather turned bad mind. Well, Maybe.

And if its snowing. You’d have to find it first then dig your way across if you did.

It made me realize as I finally reached the bottom on the other side. Its no wonder that Wainwright walked everywhere.

And I made certain I went the long way round on the return trip.